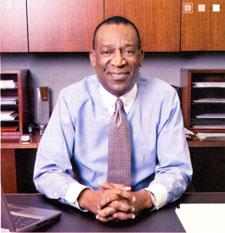 Mr. Peterson spoke to our group in 2001 and is a fine example of a lifetime career in the HR industry, having served as a Chief HR Officer for Wal-Mart, the word’s largest retail company.

During Mr. Peterson’s ten years with Wal-Mart, the People Division became a strategic partner within the company and he stressed three basic "People Needs" of getting, keeping, and growing great associates

He received the SHRM Award for Professional Excellence in 1998, and named a fellow of the National Academy of Human Resources in 1996.

He studied industrial relations as an undergraduate at Loyola University in Chicago. After receiving his bachelor’s degree, he went on to earn a master’s in industrial relations from Loyola. Soon after graduating, he was hired as a college recruiter for Loyola. Prior to his experience with Wal-Mart, Mr. Peterson spent 16 years with Venture Stores, with his last position as the Senior Vice President of Human Resources. His background includes over 30 years of experience in HR.