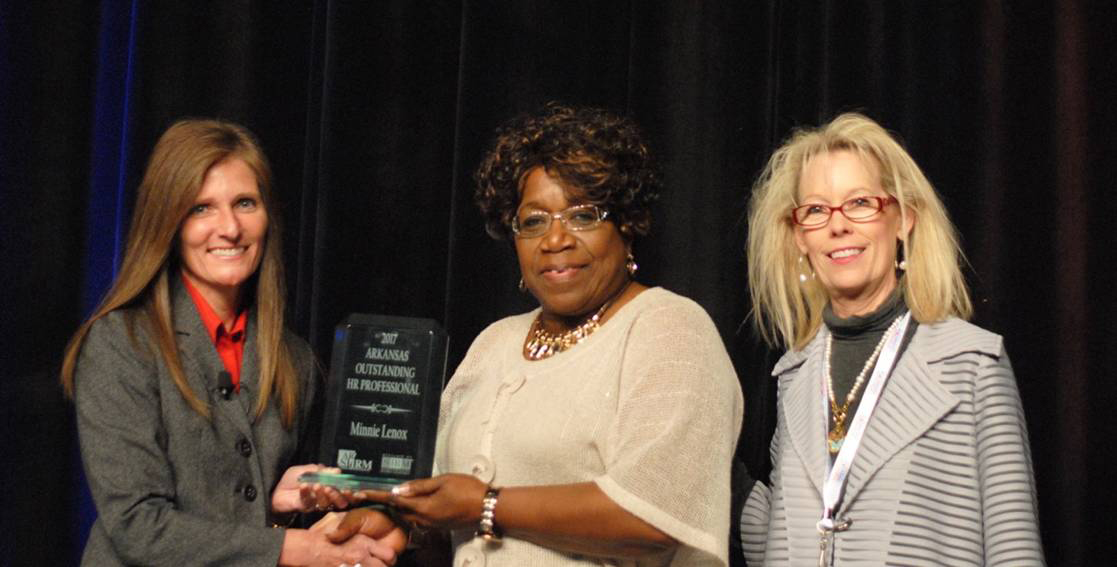 It is with great pleasure that I nominate Minnie Lenox, a very deserving individual, for the Arkansas SHRM HR Professional of the Year.  Minnie holds nearly 40 years of experience in the HR profession, serving the profession as a trainer, HR professional, leader, and volunteer.

She is a native of Hot Springs and attended Langston High, Hot Springs High, Indiana University, GCCC/ Quapaw Vocational Technical (now National Park College) and Henderson State University, where she majored in Business Administration with a minor in Engineering.

In 1982, Minnie was the Office Manager over Personnel with the Hot Springs Chamber of Commerce and the Advertising & Promotion Commission. In 1990, the City began providing the administrative duties for Advertising & Promotion leading her to become a trainer for the City of Hot Springs and in1992, Minnie was appointed Training Coordinator. In 1996, she attended Oklahoma State University, where she became certified as a Training and Development Specialist. On February 1, 2004, she was promoted to the position of Director of Human Resources for the City of Hot Springs, where she is currently employed.

Minnie has implemented many programs for the City of Hot Springs, including a highly regarded employee recognition program. Minnie makes everyone that works for her, with her, and those that she is speaking with, feel very important. In that moment, you feel you are the most important person to her.

Minnie has spoken at the WCASHRM Managers Seminar numerous times receiving near perfect scores, with one attendee saying "She speaks from the heart." Attendees request her to speak year after year at the event because each time she speaks she makes the listener feel important and each one leaves the room glad that they attended her session. In addition, she was the keynote of the 2014 WCASHRM Managers Seminar. She has also served as an Arkansas SHRM HR Conference Speaker, and the Commencement Speaker for Arkansas Career Technical Institute and College of the Ouachitas. Most recently, she was the guest speaker for National Park College's International Women’s Day Walk a Mile in Her Shoes event.

She is a member of the National Society of Human Resource Management (SHRM), and West Central Arkansas SHRM chapter in Hot Springs. She previously served the chapter and Arkansas SHRM State Council as Diversity Director.

She has been very involved in the community, especially working with our youth, through various tutoring programs as the past Community Faith-Based Tutoring Liaison for the Hot Springs School District and as a volunteer for Junior Achievement in the local school districts. She currently serves as the Youth Education Coordinator for Union Missionary Baptist Church.

She has held positions on the National Park Medical Center Women’s Advisory Board, Community Counseling Board of Directors, and Combined Federal Credit Union Supervisory Board. She is a volunteer for the Lupus Foundation of America and served as the 2014–2015 Co-Chair for REGARD.

Her hobbies include motivational speaking, conducting numerous training seminars, and writing, producing and directing various church plays, bowling, golfing and reading. She and her husband Lonell, who is a professional trainer/recruiter driver for Elite Transportation of New Jersey, have four children; Lonell (Natasha), Ronald, Eric, and Melody; and nine grandchildren.