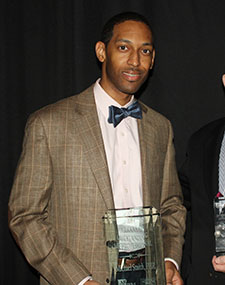 Earning his degree in Human Resources Management from the University of Arkansas, this individual's commitment to excellence and his profession are not limited to the work he performs for his employer. It's also evident in the time and effort spent volunteering on behalf of his local SHRM Chapter and the Arkansas SHRM State Council. Since 2011, he has served in two different positions on the board of directors for his chapter. As a general board member, he was instrumental in developing a strong committee of CAHRA volunteers to work on the Workforce Readiness Committee. This committee has logged numerous volunteer hours providing invaluable workforce training to residents of Our House, a shelter for the working homeless in Little Rock. Due the successes at Our House, CAHRA was able to extend its efforts and provide similar training to the residents of Women and Children First. Not only did he establish a strong foundation for this work, but he continues to volunteer his time as an instructor and speaker at Our House. His volunteer service has also been appreciated as an expert panelist at the CAHRA Job Fairs over the last several years. In this capacity, he's been able to provide solid advice and counsel, from the employer's perspective, to hundreds of job-seeking Arkansans. As the current Vice President of Finance for his chapter, his methodical approach and attention to detail has served his chapter well, helping to maintain a positive fiscal position, even in this difficult economic climate.

His contributions to the Human Resources profession are further broadened by his service on the Arkansas SHRM State Council. His commitment to helping others succeed was evident as he was charged with overseeing the State Council's efforts with Workforce Readiness. He continues to serve with distinction as the current Membership Engagement Director, reaching out to individual chapter representatives tasked with actively encouraging membership on the local, state and national levels.

Now in his seventh year with the Clinton National Airport, where he serves as the Human Resources Manager, he helps lead and manage a dynamic workforce of over 160 employees. These efforts were recently acknowledged by Arkansas Governor Mike Beebe when this nationally recognized organization was awarded the prestigious Governor's Award for Work-Life Balance in 2012.

His skills as an HR professional are also put to good use in the 189th Force Support Squadron of the United States Air National Guard, where he's served for over 14 years. Recently promoted to Technical Sergeant, he works as a Training Manager, ensuring operational training requirements are met for all those in his squadron. This requires a working knowledge of the policies, procedures, and training requirements for each position and entails tracking, coordinating and scheduling all necessary job-specific instruction.

These responsibilities correlate to his Human Resource Management experience as one who is directly involved in the development and promotion of others in their fields and areas of expertise. For his commendable performance, he was awarded an achievement service medal by the Air National Guard in December 2013.

Those who know this individual can attest to his professionalism, problem-solving abilities, dedication, and commitment to service: service to country, service to others and service to advance the Human Resources profession. He has demonstrated a remarkable ability to build networks, to touch people personally, and to inspire by example and through leadership. He has built a firm foundation and going forward, we believe we can expect from him an even greater impact on the field of Human Resource Management.

It is our pleasure to award the 2014 Arkansas Outstanding HR Professional of the Year to Michael Smith, PHR