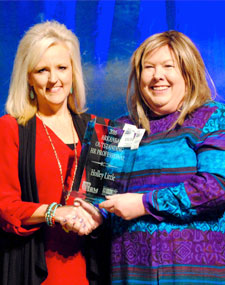 The winner of the 2016 Arkansas Outstanding HR Professional of the Year award is Holley Little.

Holley promotes the profession in the leadership in various community, civic and business organizations. She has organized HR related workshops for chamber members, worked as part of the economic development team and participates in discussions and presentations to employers considering relocation and expansion in that area.

Holley Little has been an active member of SHRM and one or more chapters for over 15 years. Has served as President, Vice President-Programs and Board member of CAHRA. She has chaired numerous committees over the years, including Roster Committee and Membership Committee – and recognized as a Rising Star of CAHRA. She has served the AR SHRM State council as Director-Core Leadership areas, Director-Communications and Awards and Director – SHRM Foundation, and is currently still serving. She has served on countless ARSHRM State Conferences including Co-chair, Sponsor Chair, and helped with Exhibitors and Decorations numerous times. She currently serves in the WCASHRM Chapter where she is Program Chair for the Chapter’s Pinnacle Award winning Manager’s Seminar, where she was program chair two times previously.

In 2015, she was appointed by Arkansas Governor, Asa Hutchinson to the Arkansas Workforce Development Board. This Board is led by the Governor and seeks to integrate multiple workforce development programs into a single system, making the resources much more accessible and user friendly to jobseekers as well as expanding services to employers.

Holley currently serves as Vice-President of FirstStaff, where she has been since the company’s founding in 2001. Holley Little is a leader at FirstStaff and has been a critical part of its growth from a start-up to 5 offices. FirstStaff was recognized for Excellence in Human Resource Management (CAHRA 2006) and as a Friend of CAHRA in 2014. Holley was a key part and leader in the activities that led to these awards. She began working in the staffing industry in 1994 and has been an important part of every organization where she was employed.