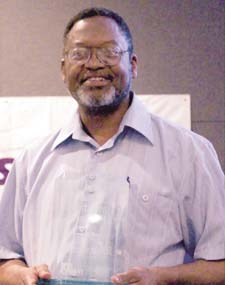 Having served his chapter in a number of roles including President, Board Chair and Membership Vice-President, Charles Frost, PHR was also previously named his chapter's Professional of the Year. In addition, he has served on the state conference committee, and as the Arkansas SHRM Director of Communications and Awards.

A graduate of the University of Arkansas, Charles became very versed in the Hog call as a member of the marching Razorback band. He served over 13 years in the United States Air Force including as a Squadron Section Commander. He has been employed with North Little Rock Wastewater Utility as Human Resource Administrator since 1991. Charles is an ordained minister and serves as Senior Pastor in the 12th Episcopal District of the A.M.E. Church, and holds a honorary Doctorate of Divinity.

Charles has a record of accomplishments including:

We are very honored to present the 2013 Arkansas HR Professional of the Year award to Charles Frost, PHR.