On behalf of the Society for Human Resource Management, I am pleased to confirm that your state council has been awarded the 2017 Platinum Excel Award. This award recognizes outstanding achievements in state council operations and a commitment to providing meaningful programs and services to HR professionals in your state. It also is recognition of your continued growth and development as a business leader, capable of developing strategies that lead to business success! We are very proud of your leadership, and thank you for your continued partnership with SHRM. 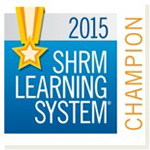 The SHRM Learning System Champion status is a recognition of your chapter’s hard work to elevate the HR profession through professional development and HR knowledge among members, gained from SHRM certification. SHRM created this prestigious distinction in support of its premier educational product. This status also helps to promote the HR profession at the local level by using the SHRM Learning System® for SHRM-CP/SHRM-SCP.

Click here to learn more about this prestigious program. 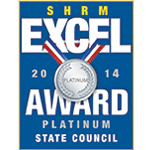 In 2014, ARSHRM received SHRM's EXCEL Award yet again. This award is part of the SHRM Affiliate Program for Excellence and recognizes our chapter's accomplishments in promoting human resources in Arkansas. 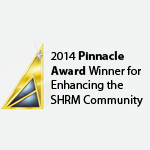 ARSHRM earned the 2014 Pinnacle Award for Enhancing the SHRM Community 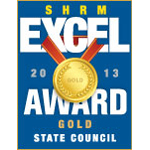 The Society for Human Resource Management (SHRM) has awarded the ARSHRM the EXCEL Gold Award for 2013.

The award is part of the SHRM Affiliate Program for Excellence, which aligns individual chapters with SHRM. The award recognizes a chapter's accomplishments and strategic activities and initiatives that promote the human resources profession at the local level.

"This recognition is a distinct indication of the chapter's successful partnership with SHRM to serve the networking and professional development needs of human resource professionals and to the advancement of the human resources profession" said J. Robert Carr, senior vice president, membership, marketing & external affairs for SHRM.

TAHRA will be recognized in SHRM publications and at SHRM conferences. As an Excel winner, it receives a certificate of recognition and a special banner to display at its meetings and events.