Jane English receives the 2015 Friend of the Profession Award.

Nationally, Senator English works with legislators as a member of the National Conference of State Legislatures (NCSL) and the American Legislative Exchange Council (ALEC). With NCSL, she is sits on the Labor & Economic Development Standing Committee and the Task Force on Redistricting and Elections. English sits on the Tax & Fiscal Policy Task Force with ALEC.

Senator English was elected to the Arkansas House of Representatives in 2008 to serve House District 42. She served two consecutive terms.

Born in Lincoln, Nebraska, Senator English is retired. She and husband Don have one son and one daughter.

Senator English has been a Workforce Development/Readiness champion for many years.  Because of her unwavering dedication to the the HR profession and HR professionals of Arkansas, we are pleased to name her our 2015 Friend of the HR Profession Award. 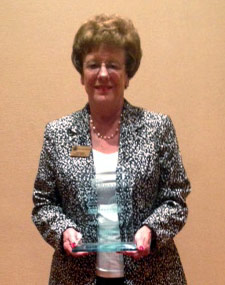