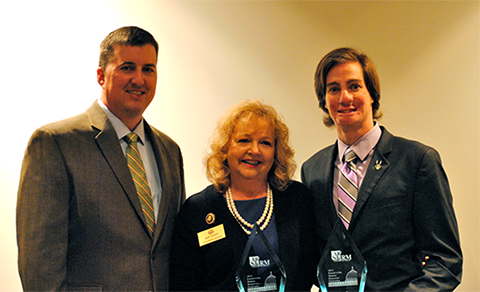 Corporal Aaron Mankin, United States Marine Corps retired, is an Arkansas native.  He served in Fallujah, Iraq during Operation Iraqi Freedom as a combat correspondent.  While conducting combat operations near the Syrian border in 2005 his vehicle was attacked by an improvised explosive device.  Six of his fellow Marines were killed in action.  He was awarded the Purple Heart and the Navy and Marine Corps Achievement Medal with combat distinguishing device for Valor.

Since then, Cpl. Mankin has endured nearly 65 surgeries.  He was the first patient to participate in a trailblazing initiative at UCLA's Ronald Reagan Medical Center called Operation Mend and became a spokesperson for the program.  More surgeries are slated for him this Fall.

He has been featured in news programs and articles around the world.  In 2008 the USO recognized Cpl. Mankin as the Marine of the Year, People Magazine named him one of their 2010 Heroes of the Year and in 2012 President Barack Obama invited him to attend a State dinner at the White House.

Cpl. Mankin continues to serve as he travels the county and speaks on behalf of Veterans and the unique issues they face while deployed or transitioning home. His advocacy work has taken him from Wall Street to Capitol Hill and in 2013 his leadership and testimony in the Arkansas General Assembly was essential to the passage of Act 598, the Voluntary Veteran’s Preference Act for private employers.

Iraq and Afghanistan Veterans of America (IAVA) recognize him as  “one of the Veteran community’s single most powerful advocates."

Oliver North wrote of Cpl. Mankin in his book American Heroes where he says, "Aaron is a hero worth hearing."

Rep. Sue Scott of Rogers is serving in her first term of the Arkansas House of Representatives, and recently survived her first General Assembly that concluded in May 2013.  She serves on the House Aging, Children and Youth, Legislative and Military Affairs Committee, and the House Judiciary Committee.  In August, she was appointed by House Speaker Davy Carter to serve on the Arkansas Health Insurance Marketplace Legislative Oversight Committee, which was created by the Legislature to oversee the insurance exchange established by the Affordable Care Act of 2010.

In February of 2013, Rep. Scott sponsored House Bill 1575, which was language drafted by ARSHRM to allow private employers the ability to implement Veterans Preference into their employment practices on a voluntary basis.  Eager to help from the beginning, Rep. Scott worked with her fellow legislators to shepherd HB1575 through the House Military Affairs Committee and then the Senate Labor Committee, testifying alongside ARSHRM State Council member Thomas Dunlap, PHR, and Marine Cpl. Aaron Mankin of Rogers.  After speaking for the bill on the House floor, HB1575 moved swiftly through both Chambers, picking up only one “no” vote along the way.  Now known as Act 598 of 2013, the bill was signed into law by Governor Beebe on April 4th, 2013.

Rep. Scott has shown a clear interest in the legislative interests of ARSHRM, and is already at work with ARSHRM on an Interim Study for future legislation that will improve the supply of labor in Arkansas and make it easier for recently discharged Veterans to find suitable employment.  Though a new member of the House of Representatives, she also found herself playing the role of “step-mother” to many more senior members of the Legislature who sought her wisdom on important issues, and she is not afraid to make a courageous vote when it best serves Arkansas.  She approaches her work as a legislator with a unique sense of enthusiasm for what she can accomplish to improve the lives of her citizens, whether they are children, veterans, or employers.

Prior to joining the Legislature, Rep. Scott was a self employed small business owner and therefore comes with a built in awareness of the burdens felt by employers due to poorly considered regulations. That alone would qualify her to be a great friend of the HR profession.  When not attending to official business in Little Rock, Rep. Scott is a talented gardener, pastry chef, and a very accomplished grandmother.