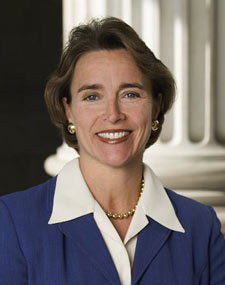 Senator Blanche Lincoln hails from a seventh-generation Arkansas farm family in Helena, Arkansas. She received a bachelor’s degree from Randolph-Macon Woman’s College in Lynchburg, Virginia, and studied at the University of Arkansas in Fayetteville.

On November 3, 1998, Senator Blanche L. Lincoln made history when she became the youngest woman ever elected to the United States Senate at the age of 38. Lincoln has been tapped as the next Chairman of the Senate Agriculture, Nutrition, and Forestry Committee. In the Committee’s 184-year history, she will be the first Arkansan and the first female to serve as Chairman.

Senator Lincoln follows in the footsteps of the only other woman to win a statewide U.S. Senate race in Arkansas and the first woman to chair a U.S. Senate committee, Hattie Caraway of Jonesboro. As a tribute to her predecessor, Lincoln uses the same desk on the Senate floor that Senator Caraway used more than 60 years ago.

Senator Lincoln’s tenure has been marked by an expanding list of accomplishments, a willingness to seek bipartisan solutions, and a fierce loyalty to the people of Arkansas and their values. She is well-known for her work on issues affecting farmers and others in rural America.

Senator Lincoln has been voted ARSHRM’s Friend of the Human Resources Profession for 2009. In the face of pressure from organized labor and the leadership of her own party, Senator Lincoln was one of the first Democrats to publicly state her opposition to the Employee Free Choice Act. Her courage led to the way for others to do the same, which effectively killed the bill in its current form. As always, Senator Lincoln is looking for a common-sense alternative to the issues raised in the Employee Free Choice Act debate, and it is our hope that Senator Lincoln will continue to listen to the voice of the human resources profession as possible alternatives are being debated.